Over the weekend I picked up GW's new Death World Basing Kit and since the product description on their website is on the vague side I thought I would post a more complete break down of what's in the kit. First off, the kit comes in a sturdy plastic case with an easy to remove lid and compartments for the components - a thoughtful feature. 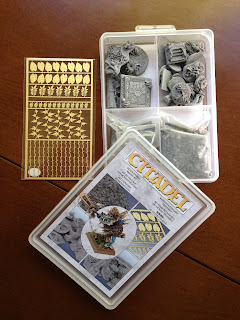 The set's real selling point is the sheet of brass etched jungle foliage. The single sheet contains 16 large palm leaves, 7 large fern like branches, 13 small ferns, 5 leafy vines and 14 thorny vines. These are all nicely detailed, but for the cost of the set it would have been nice to get two sheets considering the rest of the kit isn't terribly impressive. 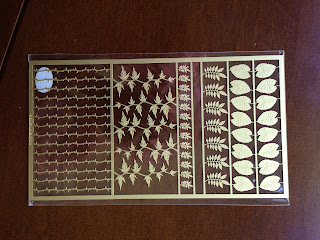 Which lead us to the low point of this review.  There are two bags of different sized gravel in the set. While convenient, you can scrounge up free rocks just about anywhere.  Insert your own McKayla Maroney is not impressed meme here.

Next there are two bags of resin pieces. Most of the sculpts have been reused from other GW sets. Many of the smaller pieces consist of skulls, spiders and small leaves. There are three pieces that incorporate the Venus fly trap plant from the Catachan heavy weapon team.  Additionally, some pieces include battlefield debris such as a las-gun and a musket. The set includes three square pieces for fantasy bases which use various bits from the stegadon kit. 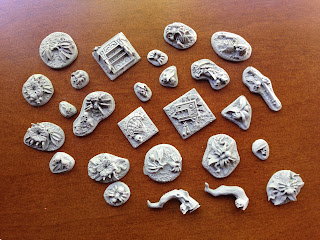 Four large resin pieces are included for bigger bases. These include a large log with a skeleton wrapped in spider webs, two pieces of Lizardmen ruins and a boring 40mm round base with a fly trap plant and Space Marine helmet. 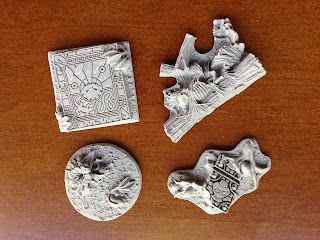 The resin pieces are convenient, but are likely not going to be worth the purchase if your bits box is decently stocked.  Conversely, if you're looking to deck out an entire army with temple themed bases, this kit won't have enough supplies for your project.  The flat bottom of some of the resin pieces are rather thick, which means you'll have to put in a bit of work to get the piece to blend into the base your working with.  These criticisms aside, the quality of the resin casts are excellent.  The details are crisp and there was not a single poorly cast piece in my set.

Outside of the brass etched foliage, this kit is nice, but hard to justify the $33 price (which is why I bought mine for $24.50 - thanks FLGS Black Friday sale!). If you're really desperate to get the foliage, the kit might be worth it to you. I have not been able to find another good set, aside from a store in England and I'm loathe to order things internationally.  Overall, you should be able to get some mileage out of the kit to spruce up the center piece models in your army - characters, monsters, elite units and the like.  If that's your goal, then I'd recommend the set.
Posted by Alex at 9:24 AM 37 comments

This past weekend Games Workshop's L.A. Battle Bunker (which is in Orange County) held their annual super-hobby-gasm weekend, which included the 3rd annual Golden Skull painting competition.  It's like the Golden Daemon, except that people like me actually have a chance to win a prize.  Speaking of which, my Saurus Calvary won first place in the fantasy regiment category and my Albino Suarus Lord won first place for fantasy singles.  I'm told I have some engraved trophies coming my way, how awesome!  The store did a great job of organizing the painting contest, which was more streamlined from the past two years.  More coverage can be found on the store's facebook page. 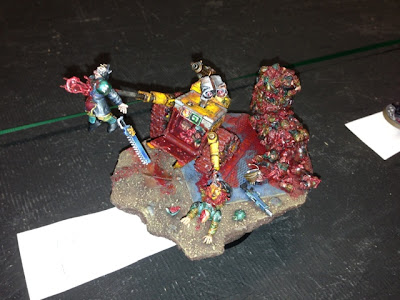 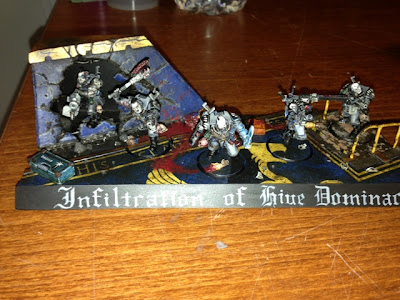 A semicolon in a post title, edgy.  Finally finished a unit filler that I started a horribly long time ago, but only now had the time to finish because everyone at the one inch warriors home base has been ill with a stomach flu, which wreaked havoc amongst social calendars but generated hobby time/baseball postseason viewing opportunities. 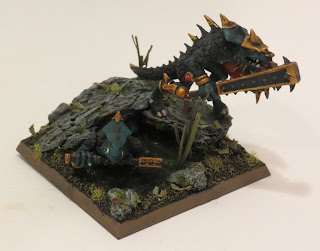 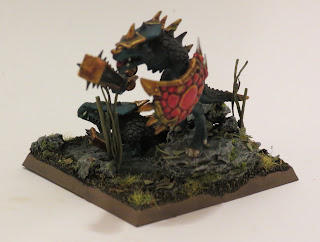 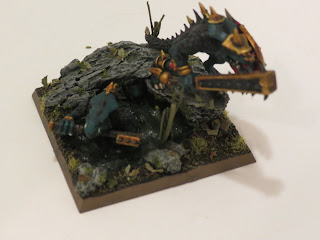 I also finished an odd Kroxigor I had lying around, which subsequently spurred me on to start the tedious project of re-basing the older units in my army.  I originally based the lizards in a horribly dark scheme topped off with some flat looking flock.  In redoing the Krox's I added some 5th Edition Chaos Warrior debris in Khorne colors to round out the color scheme on the unit.

Finally, I also painted up a standard bearer for the unit.  The sword is from the Cold One Cavalry kit. 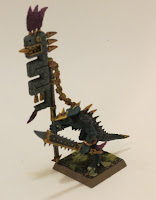 Email ThisBlogThis!Share to TwitterShare to FacebookShare to Pinterest
Labels: Lizardmen, painting and modeling

One of my ongoing Lizardmen projects has been building unit fillers for my Saurus regiments.  One of my ideas was to construct a small statue of an ancient, long dead lizard god festooned with trophies taken from the fallen enemies of the Old Ones.  After sketching a few designs, I realized the best way to make the idea come to life was to sculpt the statue out of Sculpey clay.  I have no sculpting skills, which is apparent from my first attempt, as seen on the left in the photo.  The thing came out looking bloated and lethargic, lacking the vengeful, cold-bloodedness that I wanted to evoke.  It's also too large and looks like a fifth grader made it.  I was going for an ancient, crude stone statue, but yuck.  Attempt number two on the right came out better, but there's still a few spots that will need to be cleaned up. 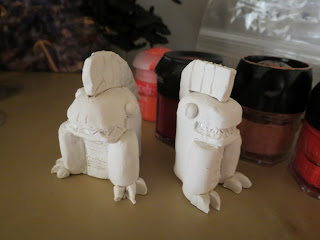 After it's mounted on a 50 mm base the plan is sculpt some jungle vines creeping up the sides with green stuff and pile up skulls, severed heads and helmets around it, in homage to some unnamed, angry serpent deity.  Then, I'll model some Saurus warriors presenting their latest offering to the gods.
Posted by Alex at 6:52 PM 7 comments

Email ThisBlogThis!Share to TwitterShare to FacebookShare to Pinterest
Labels: Lizardmen, painting and modeling

One quirk of wargaming that I have always found mildly amusing is how the uninitiated relate to the hobby, particular in terms of the vocabulary.*  Someone who's never seen this stuff before and who wants to engage you in conversation about this very strange pastime will likely not know the proper terms for all of our hobby paraphernalia.**

One of my favorite all time examples of this is The Land.  In college my buddy Justin worked at a Wizards of the Coast store and they let him take home a War-Zone Terrain game board that got too beat up to be used in the store.   His roommates took to calling the board "The Land," as in "Justin, are you gonna get out The Land and battle?"  The name stuck and even though Justin has acquired a few other gaming boards, only this one is known as The Land.

Here's some action shots from our first game of 6th edition where we brought out The Land.  Take note of the matching hills that I got from War Zone.


*The same thing happens in the legal profession when dealing with laypersons, but it's not amusing when you're dealing with a client's employee whose eyes glaze over while you explain the importance of the declaration you need to them to provide in support of your motion for summary judgement.

**During a game at a GW store a passer-by asked if my Orks were Ninja Turtles.
Posted by Alex at 9:35 PM 5 comments

welcome to one inch warriors

The primary function of this blog is to chronicle my miniature painting exploits. After that, it's all over the place, something of "personality based blog," so roll with it. The name "one inch warriors" was the semi-unofficial moniker of a gaming group that hung out in my garage in college.

Questions, comments and feedback can be sent to: 1inchwarriors@gmail.com

While I am an attorney and do make an occasional legal reference, nothing on this site should be construed to be legal advice in any way, shape or form. Additionally, all copyrighted and trademarked materials are the intellectual property of their respective owners, no infringement is intended.